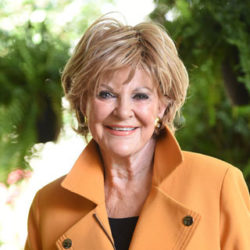 Kay Arthur’s exciting, practical approach to studying the Bible has helped millions of people discover the truth of God’s Word for themselves over the past five decades.

Kay came to faith on the morning of July 16, 1963 and quickly developed an unquenchable thirst for the Word of God and relationship with Him. Kay met her husband, Jack, shortly after coming to faith, and the two married in 1965. After several years of international ministry, health issues forced the Arthurs back to Tennessee and opened the door for the living room Bible study ministry that became Precept. In 1970, the Arthurs purchased a 32-acre farm in the Tennessee Valley and officially launched the Reach Out Ranch.

Through television, radio, writing, and speaking, God has used Kay to reach millions of households with His truth. An author of more than 100 books and Bible study workbooks, Kay continues to collaborate with the Precept team on Bible study resources. Kay and Jack served as co-CEOs of Precept until 2012 when their son David assumed the position.

Don’t miss this chance to snag a limited-edition Precept travel mug! It’s our way of saying “thank you” when you give this month—so give today and change lives!